So you may have noticed homes in your neighborhood staying on the market a little longer. It is true that over the last month or so houses are taking just a bit longer to go under contract. However, overall 2013 is shaping up to be the best year since 2008. I just finished doing some research as to how the market has been this year compared to the previous five years and I think you will agree that things are looking much better. 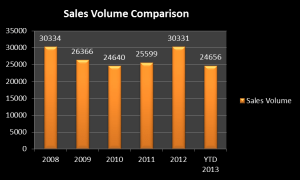 As always if you would like a market analysis done for your specific neighborhood just let me know and I will happily come by to drop it off or even email it to you.

Current inventories are averaging a two month supply of homes which is a little higher than earlier this year. We were at about a one to one & one half month supply this past spring.

Homes for sale in Parker 399

Homes for sale in Castle Rock 529

Homes for sale in Highlands Ranch 319